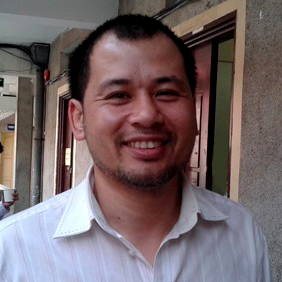 A Testimony of God’s Grace

Following high school I landed a job at a karaoke bar where I picked up drinking and drugs. I managed to hide my drug addiction from my family for over 11 years.

In 2005 I got married. Instead of spending the night with my new wife I stayed up until 2 am doing drugs. My wife didn’t even know about my drug abuse until after our first baby was born. She threatened to divorce me but even that didn’t change my addiction.

By God’s grace my wife found Christ and shared the Gospel with me in 2007. But I didn’t see my need for a Savior. I rationalized: ‘I am not addicted – I can quit whenever I want.’ Later that year, I was arrested and incarcerated for two years. My wife then divorced me. I was released in 2009, intent on earning a living by selling drugs. I was at rock bottom and had nothing more to lose.

God had other plans for me. My dear ex-wife sought me out and shared the Gospel with me once again. I didn’t want to lose her and my child, so I pretended I was converted. I’d even read my Bible while doing drugs. At one point I entered a Christian rehab center for help. Thirteen days into the program my Mother-in-Law was diagnosed with blood cancer. I went to visit her and seeing her strong faith in the midst of a horrible prognosis, changed my perspective on life. After six months of hard work in rehab I was sober. I promised God: “If you deliver me from drugs, I will give my life to serve you.”

We renewed our wedding vows in 2011 and the following year I became the pastor of a church created specifically for addicts and their families. I was filled with such satisfaction helping connect addicts with Christian rehab centers.

During this time of immense growth God desired to take me even deeper in my understanding of Him and His Word. In 2013 I began my studies at Hanoi Bible College in Vietnam. I am learning so much about how to study the Bible and share it with others.

My vision after graduation is to start a rehab center at my church for people suffering from HIV. I feel called to teach them about Christ’s love. Once they have progressed in their healing and faith in God, I’d like to train them in outreach and ministering to others.